Unlike Europe, with its tight, narrow roads, America has no restrictions on the length of the truck. Americans love huge cabs with powerful engines and a lot of chrome, a shortage of space on American roads is extremely rare. In Russia, until a certain time, the length limit was not as strict as in Europe, and the hood-mounted “Americans” were in good demand in Russia.

The dawn of American trucks in Russia occurred in 2000-2005, although the experiment of importing second-hand trucks from the United States began in 1995. Used transoceanic trucks, which seemed almost like spaceships compared to the stale KAMAZ and MAZ trucks, were rapidly filling the Russian market. According to the State Customs Committee, in 2003, about 200 American trucks were imported to Russia, and a couple of years later this number increased to 4,500. Most of the trucks were delivered after 4-5 years of use in America and not in the best condition. With a mileage of about 500-700 thousand kilometers, they were mostly trucks written off from large enterprises.

Freightliner was the top seller, followed by International, American Volvo, Kenworth, Peterbilt, Western Star, and Mack. The most popular at that time was the Freightliner Century and the flat nose International 9800. New equipment was supplied in small quantities. Also, typical representatives of the West were the Freightliner Columbia CL120 and the Freightliner Argosy. The Russian-certified trucks were almost identical to their American counterparts. They could be identified by the European position of the marker lamps on the brackets and by the metric scales of the devices. Otherwise, they remained typical Americans.

In the pre-crisis period, the percentage of imports of “Americans” in the total share of imported trucks jumped to an incredible 80%, and for good reason. European two-axle tractors were not quite satisfied with carriers operating in the East and North of the country – in these regions, the truck requires more traction dynamics, cross-country ability, and handling in difficult road and weather conditions.

The first American trucks were purchased randomly. Subsequently, they proved themselves to be the best for Russian conditions and they bribed the trucker with their simple and very reliable design, which was based on a strong, almost eternal frame, equally long-lasting powerful and unpretentious power units, and a more reliable suspension. Of course, the drivers, tired of the discomfort of KAMAZ and MAZ, were happy to accept the huge cabs of the Americans, which can be compared to a small apartment on wheels.

The excess of space was absolutely amazing. Some instances even had a bathroom and an improvised kitchen, not to mention built-in furniture, audio and video equipment, climate control, microwave, and refrigerator. Some of the trucks were very equipped with double glazing, which is very important and comfortable for the Russian climate.

The resources of American diesel engines reached blowing values, sometimes reaching up to 3 million kilometers, or even more. Moreover, a more voluminous liter compared to the Europeans and a lower compression ratio gave a noticeable increase in traction and less load on the structure. The engine life of American trucks was almost twice as long as that of European trucks. On imported trucks, the tone was set by the three engine manufacturers: Caterpillar, Cummins, and Detroit Diesel. American trucks provided their phenomenal resource only with timely maintenance, the main rule in Russian conditions was the regular replacement of fuel filters, as well as the use of specific American engine oil and high-quality antifreeze in the cooling system.

The chassis with two rear axles and a wheel formula of 6 by 4, equipped with interlocks of inter-wheel and inter-axle differentials, and most of it was offered in the standard layout, was the best fit for the Russian off-road, to the nines breaking Europeans with their simplified formula of 4 by 2. The overseas scheme is optimal in terms of weight distribution of the road train and redistribution of the load on the driving axles when driving on roads with long ascents and descents, sometimes covered with snow and ice.

An additional catalyst for the truckers’ attraction to the American trucking industry was their loyalty to the Russian requirements for the length of the road train in comparison with the European ones, which allowed truckers to engage in cargo transportation in Russia without a headache. In addition, almost all “Europeans” were equipped with speed limiters of 90 km/h, while the “American” could be accelerated to 120 km/h. Electronics on transoceanic trucks were significantly less in comparison with the “Europeans”, mainly it provided engine control and the operation of ABS.

The persistent dislike of American truckers for flat-nose trucks eventually spread to Russians, although at first the flow of used American flat-nose trucks was quite high. The advantage of the cabover trucks, which consists of easier maneuvering in a limited space, was offset by the operational practicality of the bonnet technology, the ability to carry out ongoing repairs on the power unit on the way without problematic reclining of the cab, and better safety with their two meters of life.

Sales of “Americans” only grew, and services and sales of spare parts gained momentum. So what happened? Why do “Americans” disappear from Russian roads today? The financial crisis of 2008 dealt a crushing blow. At that time, the sellers’ sites were packed with trucks that had just been driven in and turned out to be useless to anyone, and many trucks were taken away by leasing companies and banks for non-payment. Transportation collapsed, and with it, sales of second-hand “Americans” fell. The sharp fall of the ruble against the dollar in 2008 aggravated the situation, increasing the cost of overseas equipment. Meanwhile, the state began a strict and systematic “tightening of the screws” to protect the domestic manufacturer from the dominance of used foreign trucks and introduced prohibitive customs duties. With this, it put an end to the mass introduction of American trucks into Russia. Due to the length restriction, the entrance to Europe was closed, but in the Russian standard of 20 meters, the overseas hitch was easy to fit and did not pose a problem when moving around our country. Nevertheless, the baton was picked up by trucks of European brands, although in 2008, near St. Petersburg, even the production of American trucks under the International brand was organized, the time was chosen very poorly and the production of American trucks in Russia ended, barely started.

To date, a small percentage of American trucks have settled with real connoisseurs of such trucks. They monitor them, maintain them in excellent condition and continue to operate them, but the vast majority of “Americans” encountered on Russian roads are in a depressing state, and those services that were once engaged in servicing American trucks are now either closed or have changed their profile to repair other truck brands. Nowadays many spare parts have to be searched for either at disassembly or ordered with a long waiting period and a corresponding price tag. On the roads in Russia, such trucks are becoming less common. In an hour, on one of the busiest roads, there was only one “American”, although just 15 years ago there were almost more of them than European trucks.

This article is a transcript and translation of a video from YouTube “ПОЧЕМУ АМЕРИКАНСКИЕ ТЯГАЧИ ИСЧЕЗАЮТ С РОССИЙСКИХ ДОРОГ” (Why American trucks are disappearing from Russian roads). 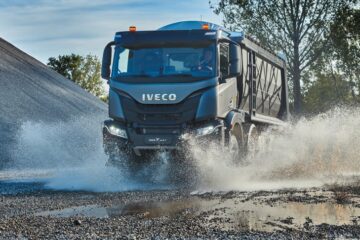 The terse lines of the press release read: “CNH Industrial confirms the termination of negotiations with FAW Jiefang regarding the business of manufacturing commercial vehicles and buses…” What would this mean and what kind of Read more…